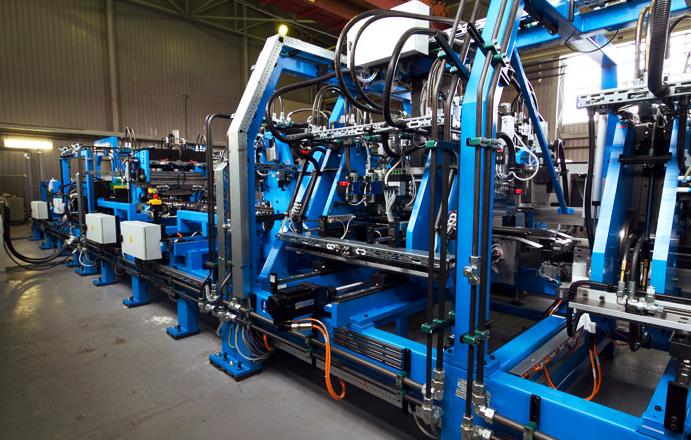 This project was implemented for Ridgway Machines Ltd (Anstey, Leicester, UK) for their client in India. This was a significant step in the way in which complex tape winding lines were built. As part of the customer’s debt, we used their practical experience and the latest technologies to reconstruct the electrical circuit and control system in order to achieve a modularity level that allows any number of machines into the line integrating virtually at the lowest cost of equipment, the fastest installation and commissioning time in operation. In the picture in the background: 4-machine line (H1 – H4); in the foreground: 7 machine cable line (B1 – B7) Line 1 includes four tape wrapping machines (H1 – H4) that wrap bare copper wire with insulation tape to make one insulated core with a rectangular cross-section. The bare wire is fed from the bobbin at the beginning of the line, then passed through tape machines using a caterpillar-type pulling mechanism controlled by a servomotor 9, and finally wound onto a bobbin at the end of the line. Line 2 includes seven tape wrapping machines (B1 – B7) in order to make a 3-core insulated cable from three separate cores. The first three machines (B1 – B3) are located on a stepped elevation. Each machine wraps one core, which is fed from a separate bobbin. After machine B3, the cores are combined and passed through wrapping machines B4 – B7 to form one whole cable. Each tape wrapping machine includes the Lenze 9300 intelligent servo drive, which synchronizes the rotation speed of the tape head with the speed of the broaching mechanism to provide the required wrapping angle. The 9300 servo drive has an integrated PLC (programmable logic controller, PLC) that drives the machine and controls both level and brake sensors, the door open sensor, and the buttons on the control panel of the machine. Each machine also has a touch screen (HMI) that displays machine status information. 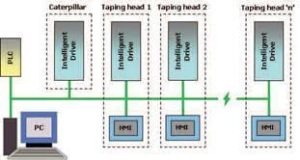 On the left picture: system topology. Each line has a remote control panel containing Lenze PLC, which coordinates the operation of all machines and monitors the safe operation of the line; plus one personal computer, screen, keyboard and mouse for entering product data and creating product “recipes”. Together with our partner, Machinery Control Systems (Telford, UK), Flexis designed a universal electrical circuit and control system that can be used in these and future lines. It requires a minimum of time and materials for building instrument panels, for laying electrical wires to machines and for installation and commissioning. That all is made in order to minimize the total cost. We achieved these goals by creating an extremely elegant, efficient and cost-effective solution. The key to the modularity of these lines lies in a distributed control system, using the latest network technologies to simplify communications, as described below. Flexis designed a common control module, which is used in the tracked pulling mechanism and in each tape wrapping machine. The module is based on Lenze 9300 intelligent servo drives, which have an integrated PLC (programmable logic controller, PLC) with digital input/output for processing discrete signals (e.g. buttons, sensors, etc.) and coordinate them with the main movement task. 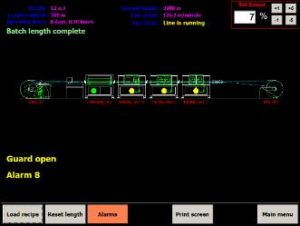 On the left picture: operator’s interface. The 9300 servo drive controlling each machine, the HMI touch user interface on each tape wrapping machine, controlling the entire PLC line and generating PC machine parameters. In total, in the case of a cable line 17 smart devices are all connected via the CANopen bus. This is a single cable connecting all the machines in a daisy chain, which allows you to transfer simple instructions (for example, “start a cycle”) and complex data to a specific machine or to each device on the network. The settings, or recipe, for each product are calculated on a PC using a universal set of calculations that was developed for all tape wrapping lines. The developed calculations not only determine the parameters, such as the gear ratio between each tape head and the caterpillar pulling mechanism 10, to ensure the necessary turning angle. They also check that none of the rotational speeds and accelerations required for each tape head exceeds its safe working limit and if this happens, the speed of the caterpillar traction mechanism is automatically reduced so that all the heads work within their safe limits. After calculating the parameters, they are transmitted via CANopen to each machine. In order to synchronize the tape heads with the caterpillar pulling mechanism, the encoder signal from the drive of the track motor is transmitted from its own 9300 servo drive to the servo drives of each tape machine. The main benefit of this topology is that it minimizes the amount of wiring in each machine, because all the connections between the logic and motion controllers are internal to the 9300 servo, and because CAN eliminates virtually all the wiring that would otherwise be necessary between machines and PLCs in the conventional construction of machines. The software is also written modularly. For example, it recognizes when a new machine is added to the line. To integrate a new machine into the control system, it simply needs to be assigned a unique CAN address, which simplifies commissioning.